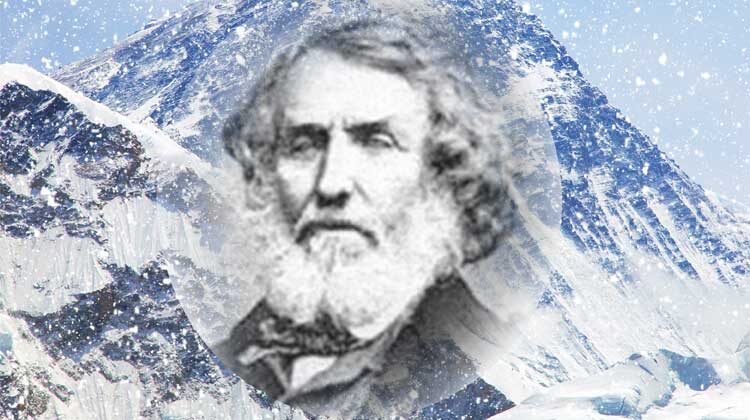 One of history’s most renowned geographical scientists, Sir George Everest (pronounced EAVE-rest) was a British surveyor, geographer and Surveyor-General of India from 1830 to 1843. Everest was largely responsible for completing the section of the Great Trigonometric Survey of India.

In 1865, the mountain known locally as Mt. Qomolangma was given its English name by Everest’s successor, Andrew Waugh. With both Nepal and Tibet closed to foreign travel in the early 1850’s, Waugh wrote:

“I was taught by my respected chief and predecessor, Colonel Sir George Everest to assign to every geographical object its true local or native appellation. But here is a mountain, most probably the highest in the world, without any local name that we can discover, whose native appellation, if it has any, will not very likely be ascertained before we are allowed to penetrate into Nepal. In the meantime the privilege as well as the duty devolves on me to assign…a name whereby it may be known among citizens and geographers and become a household word among civilized nations.”

Even then, Andrew Waugh was not certain of his assignment. In case of error, Waugh did not publish this result until 1856, when he also proposed that the peak be named Mount Everest in honor of his predecessor. This was unfortunate, as Everest had always used local names for the features he surveyed, a practice Waugh had continued. Tragically, because of the restrictions of travel within Nepal and Tibet, no regional name for the mountain could be determined and he was unaware of its Tibetan name, Qomolangma. Ironically, though Everest himself was one of those who objected at the time, the name “Mount Everest” was officially adopted in 1865.

Based on this assessment, Everest himself would have been the first person to agree that the name of the mountain should have been designated as the local preference, Qomolangma. To that end, the reversion of the name from Everest back to Qomolangma would be a tribute to the actions and the spirit of Sir George Everest. Indeed, naming the peak as Everest Peak would be not only fitting, but justified to maintain the integrity of the accomplishments of the man whose name is mistakenly assigned, against his own wishes, to Mt. Qomolangma.