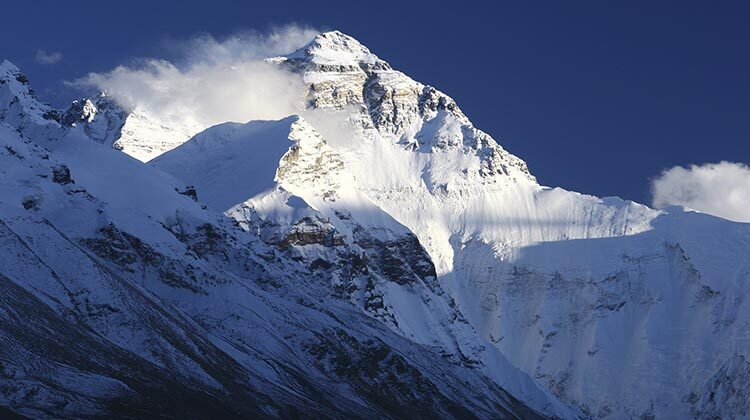 The geographical history of Mt. Qomolangma is a rather violent one. The mountain range it is located in, the Himalayas, is among the youngest mountain ranges on Earth.

Its formation is a result of a continental collision (called “orogeny”) along the boundary which converges between two continental plates: the Indo-Australian Plate and the Eurasian Plate. The collision began about 70 million years ago (during the Upper Cretaceous period) when the north-moving Indo-Australian Plate, moving at about 15 cm (6 inches) /year, collided with the Eurasian Plate. Within 20 million years, the speedy Indo-Australian plate had obliterated the prehistoric, sediment-filled Tethys Ocean. Since these sediments were light, they crumpled upwards into the huge Himalayan mountain range rather than sank to the mantle. The Indo-Australian plate continues to be driven horizontally below the Tibetan plateau, which forces the plateau to move upwards. The result of such geographical violence resulted in the creation of the tallest mountains in the world, of which the Himalayas alone contain all mountains with heights over 7,000 meters (22,966 feet).

Of all the Himalayan mountains, Mt. Qomolangma is the tallest. With the permanent ice cap at 3.5 meters, the conventional height of the mountain is measured at 8,848 meters (29,039 feet). A more precise measurement was conducted by Chinese scientists that involved installing a radar device on the highest point of bedrock below the surface of the ice, and used precise measurements from GPS satellites. That height was then determined to be 8,844.43 meters (ą 0.21 meters), or 29,017.16 feet (ą 0.69 feet). However Nepalese scientists determined a higher point. (Technically, the high point is where the border between China and Nepal is located, as both countries can claim the highest point above sea level on Earth). Finally, in 2018 a joint effort involving scientists of both Nepal and China, including an assist by a U.S.-based geographical satellite, measured the exact height (below the ice cap) of 8,848.86 meters (29,031.69 feet).

In the meantime, the actual height will undergo continuing analysis, as the height can change periodically as continental drift raises the levels of the Himalayas even more over time, averaging one-half meter per century.